My wife keeps buying books, so every once in a while I must buy another 84×30-inch bookcase. The last time around I avoiding paying delivery by taking her car. Which happens to be a Chrysler PT Cruiser. The store employees took one look at the car and suggested that I’d better pony up for delivery. No way a seven-foot bookcase was going to fit inside such a compact car.

But it did, and with the hatch closed. At other times I’ve used the PT to bring home twin mattresses and a fully boxed storm door. The secret: a front passenger seat that folds flat much like the second row seats. To my knowledge, the 2001 PT Cruiser was the first U.S.-market car with this feature. Since then, a number of other models also offer it, including the Ford Freestyle, Chevrolet Malibu Maxx (pictured), and Hyundai Tucson. Oddly enough, you can get a fold-flat front passenger seat on the Pontiac Grand Prix, a sedan which in just about every other way prioritizes sportiness over utility.

Much more surprising are the vehicles in which you cannot get a fold-flat front passsenger seat. This group includes the large crossovers from Chrysler, General Motors, Honda, Hyundai, and Mazda. In a segment that puts so much emphasis on utility, 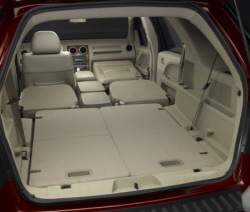 only the Ford Taurus X (an updated and renamed Freestyle) offers the ability to carry large cargo that extends the full length of the interior. Off the top of my head, among minivans only the Toyota Sienna offers this feature. The otherwise space-efficient compact crossovers from Kia and Mazda don’t offer it.

In the Grand Prix, this feature is a $75 option. As a standard feature, a fold-flat front passenger seat would add about $50 to a vehicle’s price. In my wife’s PT Cruiser, it’s already saved me at least four times this amount in delivery charges. Every vehicle with a hatch should offer this feature, at least as an option.